Leading ways of shark attack prevention and things that one should know before entering the ocean:

Go back to homepage: Page 1.

-Do not swim, dive or surf where dangerous sharks are known to gather

-Do not swim in dirty or turbid water conditions

-Avoid swimming well offshore, near deep channels or along drop-offs to deeper water (sharks are more likely to inhabit the deeper water)

-If schooling fish congregate in large numbers, leave the water (sharks can be feeding on the baitfish schools)

-Avoid entering the ocean near a river mouth, especially after a rainstorm (rain can wash potential food items into the sea that might attract fish and sharks)

What Kind of Sharks Attack Humans?

"Based on the damage suffered by the teens in North Carolina, shark expert George Burgess says a large tiger or bull shark is most likely to blame. Those two species are often found right along the coast and are known to occasionally bite people", says Burgess, who studies attacks at the Florida Museum of Natural History. 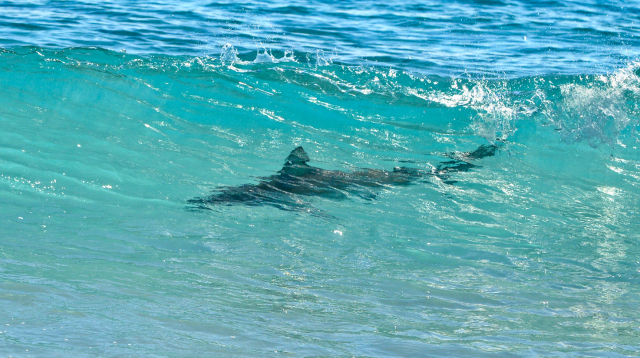 “The number of worldwide unprovoked shark attacks has grown at a steady pace since 1900, with each decade having more attacks than the previous,” reports the International Shark Attack File at the Florida Museum of Natural History. While scientists are uncertain why specific beaches have become hotspots, they are able to track trends in behavior. Most of the sharks that swim close to the shore — and are likely responsible for attacks — are juveniles. Statistics show sharks tend to avoid crowded beaches. The most recent attacks took place in more remote waters, far from the hordes of sun-worshipping beachgoers. Sharks may feel threatened by the presence of a human, and they could be trying to send a signal that the person will not be able to see. When those warnings go unperceived, the shark could attack.

To learn more, check out these Shark Attack Prevention!

To learn more, check out these Shark Theories!